You Never Know What Might Come Next (Limited Edition) 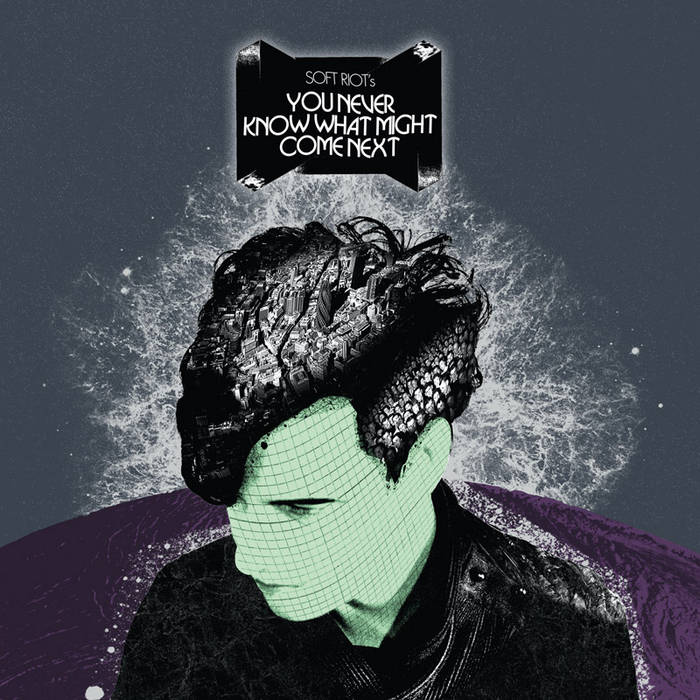 THIS IS THE LIMITED EDITION, PRE-RELEASE CD VERSION OF THE ALBUM "YOU NEVER KNOW WHAT MIGHT COME NEXT". More information on other formats below.

The standard LP and digital-download only editions are to be released in Summer 2015 on the Exhibition Records label (www.exbtnrecords.com). If you are looking to purchase this record in those formats, please head over to their website to find out more information on how to pre-order/order those formats. Vinyl LP and digital-download formats will be available through this Soft Riot online store as well at that time.

All tracks marked with an asterisk (*) are only available on this CD version of the album, not on the standard versions.

All purchases of this limited edition CD will come with a digital download of all the tracks included.

Once this version is sold out, it will not be repressed.

Bassoon in “Mass Exodus” played by MM Lyle. A brief phrase from “Into The Labyrinth Theme” by Sidney (1981) appears in the track
“Mass Exodus”.

“The Speech”, “Your Back To The Stone” and “We Are The Chopped” recorded and mixed by JJD at Studio 159 in Sheffield between December 2014 and March 2015.

“We Are The Chopped” written by Nomeansno. The original version of the track was released on their album Mama (1982).

Artwork, artist photos and design by JJD as JJD Works. Photography assistance by MM Lyle. All tracks mastered by Josh Stevenson at Otic Sound except 11 and 12.

An anguished singer on TV
You relate to the grave misery
but there’s bigger problems than your own and you know it
Bow out of this excess style to a place to escape for a while
to make you say “Hello, I want in it”
There’s human clones, talent shows,
crisis zones and the unknown

It was a sudden disclosure
But one that we all feel deep down in there
She’s then up in a second,
Skipping breakfast and running down the stairs
Through the door to the open,
to the station for the next train into town
She’s got a bone to pick now with that great evil out there

The train is packed with commuters,
Reading headlines and oppression and despair
And a pic of some leader, out of touch and mentally beyond repair
And she feels that tension, screaming like a banshee in the air
The cards fall around her
Like weapons from that great evil out there

Down at the last station, yes the spot ain’t too far from here
She can feel the direction:
The old building on the back side of the hill
People walk all around her
Not knowing if they’re here, there or anywhere
As the vices tighten from that great evil out there

Behind that old building she’s stopped in her tracks
At the bottom of some stairs by a figure in a black suit who says
“I know why you’re here and you won’t go any further now.”
Then he pulls his sunglasses down,
Two white spheres with a killer stare
Something strange goes on now;
It seems that great evil has arrived here

There’s no time to wait now,
Her fingers grab a huge space of that air
The dimensions bend around her;
Strange sounds; a reason to be scared
She tears it right open,
And she can see what she rumoured all along
The space turned into a mirror,
Reflecting a common truth everywhere

She falls to the ground now, smiles faintly and looks up at the sky
There’s a chaos around her
But she knows now there’s a chance it could subside
The tables turn over
And who knows where things will go from here
You know this as a story
But you know where to take it all from there

When it brings you down it’s tough to get up
You wanna get down, but you gotta get up
And it’s tough to get up but you do it anyway
Track Name: The Speech
Down at the waterfront at a palace made of jewels
A large troupe drop the red banners for the evening news
Large monitors glow blue deep inside a hidden room
An eagle eye to every corner in the vast and stately view

Abstract words over discreet headsets as they set up the cues
Elsewhere inane headlines divert; infect like a flu
Architects of shrewd moves to engineer a truth
But hush hush as the lights go up and a man approaches the booth

All rise, for he will speak tonight to you

Outside the palace lights a crowd gathers on the street
Voices barking in the heat of night calling him a cheat
Frantic commands in the hidden room to cut to another scene:
A woman blank eyed rambling on about microwave cuisine

Or you can just fall back to the dark…

Here you are again with your back to the stone
Feel the scan of infiltration that scorns at all that you’ve done
You broaden your understanding to make what’s alien a home
Like that film goes “Listen kid, we’re all in this together.”

Walk away from the stone and change into a new skin
You can feel the difference as you step out into the sun
All this talk about hellfire is just meant to put the fear in everyone
But no, we’re not “everyone”, in this wreck we’ll try to have fun.

Or you can just fall back to the dark…
Track Name: Mass Exodus
Don’t want them to see through you
So that’s why only you go out at night
Days on end of feeling blue, well yes, that’s just modern life

A game of hunter and prey, gamble the ground under away
You feel more lost day by day
This place a habit you cannot break

A game of hunter and prey, gamble the ground under away
You feel more lost day by day
This place a habit you cannot break

Cities collapse in on themselves until the last light goes out
A half million pound flat flattened to the ground
It falls to the ground
Track Name: A Scene From A Dark Beach
Today a president was shot dead
He guessed someone had enough
Some days he wakes up feeling fucked in the head
And he thinks he may have had enough

Things are moving faster all the time
New, empty machines won’t sync in time
More and more freedoms are becoming crimes
And into this realm we have to climb

And stare out at the crashing waves

And stare out at the crashing waves
Track Name: You Are A Caged Dancer
When you reached that moment that’s when you let yourself out
Into the streets so frightful and prices so impossible
And soon that pristine voice in your head got fed up
Those hands will always pull you down so you keep your head up

Why don’t you take a chance on…?

Well, it’s no secret that the whole thing is rigged up
You knew that from the start; the race to eat it all up
But if you stand and listen at the outer horizons
There’s chorus starting to swell and it will all soon kick off

Why don’t you take a chance on…?
Track Name: Better Than The Real Thing*
He wants to rise above it all tonight
But it seems he always hits the roof
Of his small flat in a checker board
Where the king is foul and in the crowd

There’s a period of panic; some strange isolation
But out there something calls

Better than the real thing

Maybe that’ll be better than the real thing
Track Name: The Commuters II*
Go as far as you can go…

The humming buzz of circuits change into a song
An escape to things still unseen
The conductor then comes, introduces herself
And with a smile and a flash in her eye, she says:

“Here’s to all you young commuters.
Go as far as you can go.”

They’re stepping out of the carriage now
And greeted by a man with hollow teeth
Standing next to him his a figure in a cloak
And then the first man starts to speak and says:

“He calls you The Young Commuters.
Go as far as you can go.”