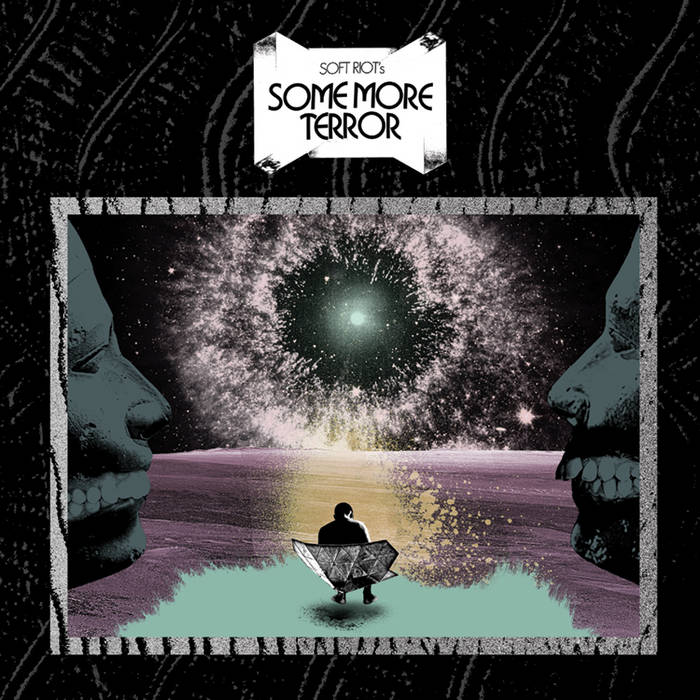 Some More Terror is a Soft Riot recording consisting of 11 tracks of instrumental, ambient-influenced synth sounds. It provides a slight detour from the more song-based, psychedelic synth-pop trajectory established with the previous album, Fiction Prediction, and where that synth-pop sound will go on that album’s proper follow-up to come called You Never Know What Might Come Next.

All of the pieces on Some More Terror are mainly improvisations, or based on one-session jams with a small amount of overdubs. They were usually done late at night and in the dead of winter, in between sessions recording tracks for You Never Know What Might Come Next.

Some More Terror locks onto the atmospheric element of Soft Riot’s recorded material to date and isolates it in a new environment, freeing it from the structure and formalities of the world of punk rock and pop music. It offers an audio landscape that augments a feeling of unease and reflection in the chaotic world of late-period modern capitalism and the wheels of progress. The flow of the album rides a slow sine wave, with moments of anxious dread to warm, expansive slabs of calm and harmony.

To some degree it’s an album of political commentary, but one without lyrics and familiar audio cues, allowing the listener to fill the gaps with their own speculation. And where the music is more ambiguous, a more upfront approach is emphasised in the track titling and artwork of the album; perhaps a conscious effort to challenge the idea that ambient or soundtrack-oriented music is passive or locked in the trappings of “new age”. It could be considered Soft Riot’s own private and current version of “punk rock” for these reasons, as well as for that it was written from a place deep within. There’s a lot of strange and harrowing events going on out there in the world these days, but also moments of peace and beauty.

Listeners may find some parallels with classic synth artists such as Tangerine Dream or Cluster, or perhaps the classic era of early/mid 90s Kranky Records (Labradford, Stars Of The Lid), or even at times the micropolyphonal sounds of György Ligeti. As one publication has put the music of Soft Riot: “The music tells stories like the great “irritation” sci-fi cinema of the 70s and 80s. Solaris pop. New Age Wave. The Canadian Jean Michel Jarre of the London underground.”

Soft Riot is JJD : Synthesizers, programming, effects, found sounds, voice. Tenor saxophone on “As You Feel The Dark Side of Progress” by JJD.

The recordings on this release are mainly improvisations or based on one-session jams with a small amount of overdubs. They were usually done late at night and in the dead of winter.