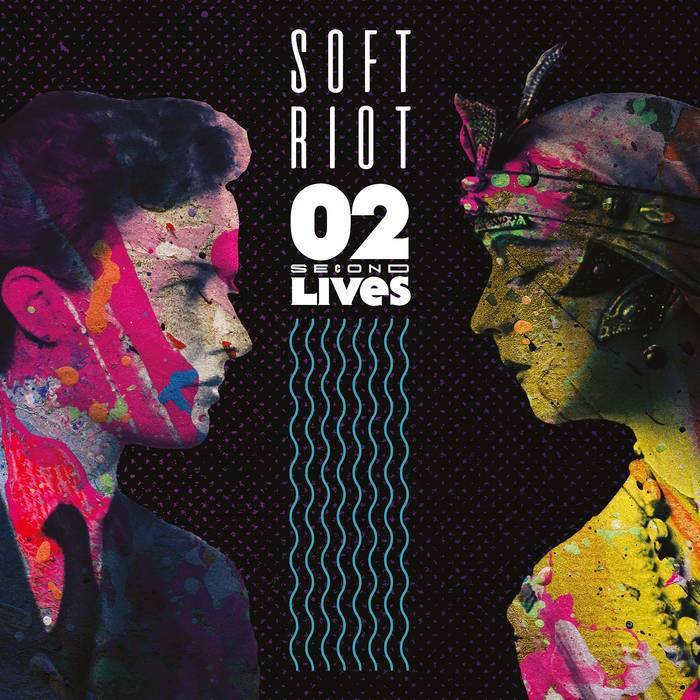 Exemia Truly a masterpiece! Favorite track: Another Drone In Your Head (Second Version).

NOTE — To actually stream and listen to the tracks ahead of the release day, please go here: www.softriot.com/2021/06/compilation-album-second-lives-out-28-june-2021/

Marking just over ten years since the original No Longer Stranger EP back in early 2011, it's now been a decade since Soft Riot has been in existence. And on that touchstone comes the newest release called Second Lives, a compilation album featuring a collection of eight tracks of previously released tracks from obscure singles on various compilations, re-worked versions of previously released older tracks as well as some unreleased material.

Originally the concept for such a release was to be a more comprehensive archive of unreleased material that has been collecting over the past decade, including demos, odd bits and other ephemera, but with this final version as Second Lives, sees the release fine-tuned into an album of its own right, focusing on key tracks and bringing out their strengths, updating old tracks — often ones that are still played out live — to give them new life and perspective.

1. Lovers In A Dangerous Time
Originally released on a sampler for Young & Cold Records back in 2016, this track — a cover of a song from the album Stealing Fire by Canadian songwriter Bruce Cockburn — has been a well-received staple in live sets since then as well as popular track on various online streaming platforms. For this release new vocals were recorded, along with some revised instrumentation and an overall new mix in April 2021.

2. Cinema Eyes (Version IV)
This track has continued to be played out live often and has numerous versions of it across multiple releases and compilations. This most recent version has appeared on the Forbidden Figures I compilation, released as a benefit for raising legal fees for fellow synth artist Nao Katafuchi back in November 2020.

3. Another Drone In Your Head (Second Version)
Originally released on both the 2012 EP of the same name as well as the 2013 album Fiction Prediction, the song has still been played often in live sets and has changed with the times. This new version is closer to how it sounds live currently, complete with some new instrumentation and re-recorded vocals done in April 2021.

4. Your Back To The Stone (March Version)
This is an instrumental, somewhat different version to the original track, which was released on the 2015 album You Never Know What Might Come Next. It was was written and produced back in 2015 on a commission for a French synth/post-punk label that was compiling tracks for a compilation, with all tracks to have a "martial" style. However, this compilation never came to fruition and is only included on this release.

5. Write Yourself Into The Void (Second Version)
Released as a track on the 2013 album Fiction Prediction album, this track laid dormant for around five years after which point a complete re-work of this track started in 2018 and then on and off again over more recent times. Having a personal attachment this track, there was a feeling that it could come out as something new and stronger with an updated stylistic direction. It's been drastically reworked with some new instrumentation, re-recorded vocals and a completely new mix finished in April 2021.

6. We Are The Chopped (Second Version)
A cover of a Nomeansno track from their debut 1982 album Mama, the original version of this cover was buried in the limited CD edition version of the 2015 album You Never Know What Might Come Next and only available on that CD version and until now was never available in a digital form. This new version is an updated rework, with re-recorded vocals, some new instrumentation and arrangement changes, along with an updated mix completed in April 2021.

7. Fool For A Day
An unused track from the writing sessions of the 2019 album When Push Comes To Shove. This track was mixed and mastered simulatenously with the final group of tracks that made it on that album. It however has never been released until now.

8. Long And Tangled Thoughts
A track written during the writing sessions for the 2020 album Chin Up that never made it to the final track listing. This version has a new mix done in April 2021.

- - -
All tracks written, produced and mixed — along with artwork and assembly — by JJD. Mastered by John Stevenson at Otic Mastering.
- - -

A note about the artwork: Featured on the cover of Second Lives are images of two female pioneers:
• Helen Richey: a pioneering, female American aviator and the first woman to be hired as a pilot by a commercial airline in the United States.
• Ruth St. Denis: an American pioneer of modern dance, introducing eastern ideas into the art.
Often working with a library of archived images re-worked into Soft Riot’s distinctive visual, it seemed these images — found in archived Creative Commons library — have therefore been re-discovered by the artist along with their somewhat forgotten achievements, giving them a “second life” in their own right through the album’s artwork.